Welcome Back To… Hull 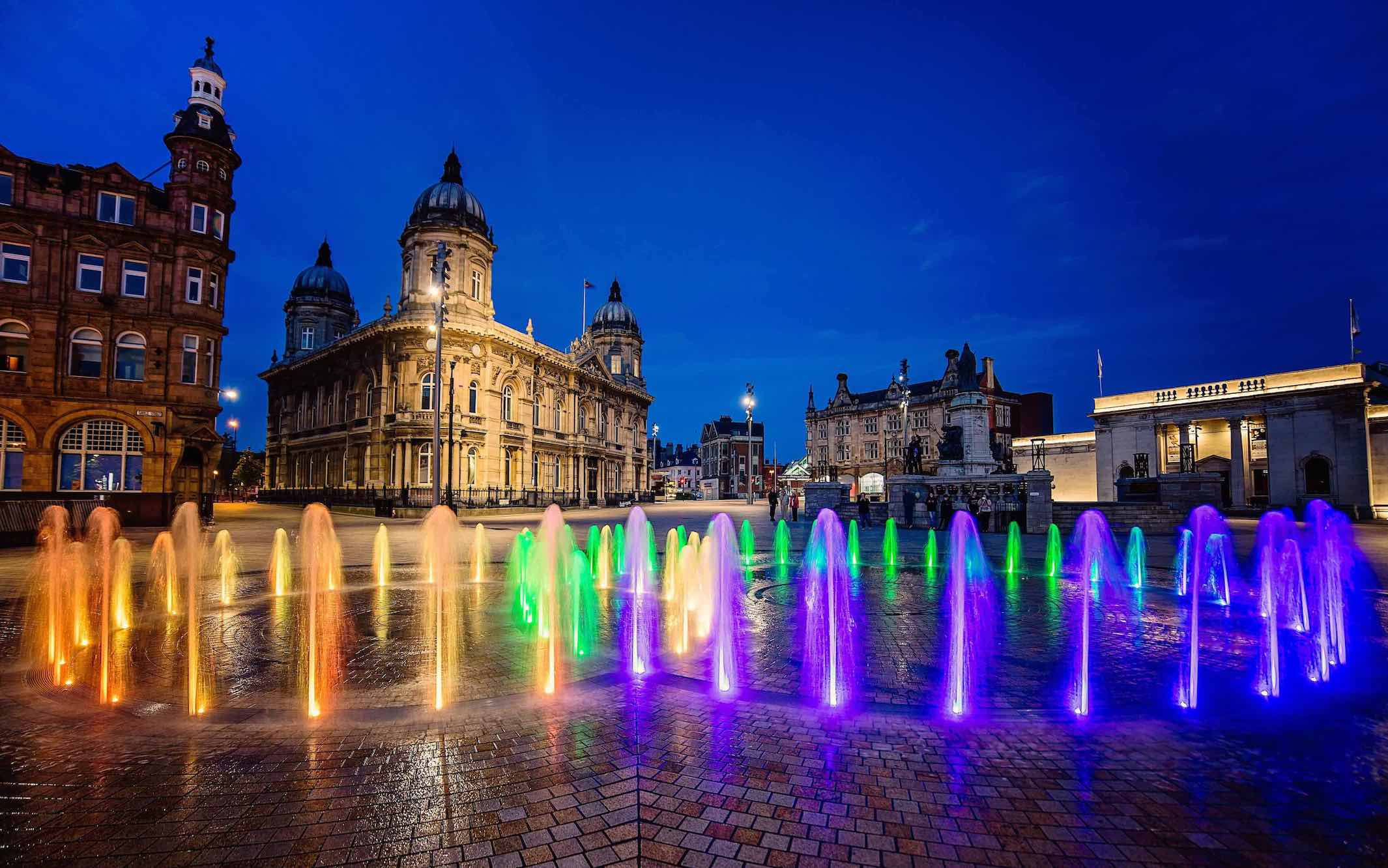 With restrictions easing, destinations and attractions are welcoming back visitors safely, in line with the Government’s roadmap. Travel is back on the agenda for 2021… so, here are a few new treats to welcome visitors back to Hull.

Visit Hull has launched a new campaign to welcome visitors back to the city. The It Must Be Hull Campaign will invite visitors to rediscover Hull, with a major advertising push alongside new content on the Visit Hull website outlining all that Hull has to offer. There will also be new social media activity as well as radio and YouTube advertising, all aimed at encouraging people to discover, or rediscover, the city. Hull’s hotels are also creating special offers as part of the campaign, which will run through until the autumn. www.visithull.org

Yorkshire’s maritime city has long celebrated its links with the sea, but Hull’s seafaring heritage has also helped shape a revolution in urban farming, thanks to home grown food nurtured in old shipping containers in a former dry dock. Built by the community, for the community, ‘Rooted in Hull’ is a place for locals to learn about food and improve overall wellbeing, but also has a Farm Shop & Kitchen, plus new wood fired oven bakery for bread – and plans for pizzas at night-time gatherings. www.rootedinhull.org.uk

Banksy may have hit the headlines back in 2018 when he left his mark on Hull, but the city is fast gaining a reputation of its own for impressive public art, including a ‘street art quarter’. From huge colourful Geisha girls created by an international artist to quirky home-grown murals, Hull’s street art scene is drawing attention from the creative world as well as attracting visitors from near and far. Proving a real draw is an innovative Hull original – an outdoor gallery of street art. Bankside Gallery launched in February 2018, just after Banksy, one of the world’s most famous street artists, painted a mural on the city’s Scott Street Bridge. https://bit.ly/33xG12K

French Impressionist Claude Monet’s stunning landscape painting, Antibes (1888) forms the centrepiece, and is the inspiration for, an exciting new exhibition at the Ferens Art Gallery. The masterpiece has travelled to Hull for the first time as part of an innovative new programme in partnership with The Courtauld, London. Selected works from Ferens’ permanent collection accompany it, including by Walter Richard Sickert, Philip Wilson Steer, and Barbara Hepworth. The key theme for the exhibition is that of mindfulness, with Monet’s landscape as the anchor point. Until 4 July 2021. www.hcandl.co.uk/monet-in-mind

Next year sees the centenary of poet Philip Larkin’s birth – so how about getting ahead of the crowd and celebrating the life of one of the 20th-century’s greatest poets, who was Hull University Librarian from 1955 until his death in 1985. Follow in Larkin’s tracks, not only on a literary journey, but also one through diverse landscapes and rich architecture. Seeing the city through a poet’s eyes, there’s a chance to gain a philosophical view of the place where Larkin lived and worked for three decades. www.visithull.org/whatson/the-larkin-trail-2/

An iconic Fish Trail and a virtual time machine

Hull’s popular Fish Trail, featuring 41 fish pavement etchings across the city, all life-size, ranging from a school of 36 tiny anchovies to a 10ft ray, has now gone digital, with a free app that can turn your mobile phone into a virtual time machine. The trail, which weaves its way through Hull’s Old Town (www.visithull.org/to-do/fish-trail/), can now be enjoyed alongside The What Was Here? app. The digitalised Fish Trail, developed by Visit Hull and East Yorkshire (VHEY) alongside Hull tour guide Paul Schofield, allows visitors to view historic images of the city as they navigate the trail. www.visithull.org/to-do/what-was-here/

Dive back into The Deep

One of the most spectacular aquariums in the world, and home to 5,000 animals including magnificent sharks and rays, The Deep is welcoming back visitors once more. The strikingly designed building, overlooking the Humber estuary, has become an internationally recognised landmark and even featured on a Royal Mail stamp. As well as offering the chance to see the award-winning aquarium’s marine life, including the UK’s only pair of Green sawfish and a colony of Gentoo penguins, The Deep operates as an education and conservation charity and in recent years has become an international player in marine conservation. www.thedeep.co.uk

Head for Hull’s boutique apartment hotel, The Hideout, and you can enjoy an award-winning stay in accommodation that scooped top honours on the popular Channel 4 TV show ‘Four in a Bed’. Offering contemporary self-catering boutique hotel apartments, The Hideout is tucked away amidst the cobbled streets of Hull Old Town, overlooking Hull Minster and Trinity Square. With fully fitted kitchens, work/living spaces and luxurious bathrooms, it scored top marks against three other venues to win the award for best bed and breakfast in the Channel 4 show in April this year. www.hideouthotel.co.uk

Not surprisingly for the 2017 UK City of Culture, Hull knows how to put on a party. Since its year in the global spotlight, it has built on its success to continue making art and culture headlines. After going digital last year, Hull’s cultural flagship Freedom Festival (www.freedomfestival.co.uk) aims to be back on the streets in September 2021, but has already made a splash with its The Hull Vigil, the first UK destination to host this thought-provoking work (www.thehullvigil.co.uk). Also set to return in 2021, Humber Street Sesh (www.humberstreetsesh.co.uk) celebrates the creative brilliance of the city. The summer festival takes over the Fruit Market, Humber Street, and marina, for live music, stalls and food and drink, with more than 200 acts expected.

The joke’s on us!

Hull is full of hidden history, such as Hepworth Arcade, a Grade II listed shopping arcade in the Old Town, dating back to the late 1800s, which was home to one of the first Marks and Spencer penny bazaars (https://bit.ly/3ut7IVM). Today it’s home to independent retailers, including the wonderful Dinsdale’s Joke Shop, passed down through the family for the last 90 years, selling magic, fancy dress, jokes and novelties (www.dinsdalesjokeshop.co.uk). Elsewhere, discover what is said to be the smallest window in England, at the George Hotel, one of the city’s oldest surviving pubs, in the strangely named Land of Green Ginger (https://bit.ly/34qgDfY).

From the Hull Pattie to contemporary restaurants in The Fruit Market

Hull is also making a name for itself for its food and drink scene, with new restaurants, gourmet street food, gin distilleries and microbreweries joining an already well-established Ale Trail (www.visithull.org/to-do/ale-trail/). Explore a world of street food at Trinity Market, Hull’s oldest covered market, home to a host of street food traders since a £3m refurbishment in 2017. The market is now at full capacity for the first time in its 117-year history (www.trinitymarkethull.co.uk). The regenerated Fruit Market area, where disused warehouses have been transformed into Hull’s cultural quarter, also offers an array of restaurants and cafes. But there’s still plenty of room for tradition. So, how about deep-fried mashed potato with sage and onion stuffing in batter? Since the 1800s the Hull Pattie, soft in the centre and crunchy around the edges, has been a city favourite.

Bridging the centuries: sea the change in Hull

Hull aims to redefine itself as a key city of the north with a huge investment in a four-year project that will see some of its most historic maritime attractions expanded and improved, creating new visitor attractions. Making Hull’s 800 years of seafaring history even more of a key part of the city’s tourism offer, the ‘Hull: Yorkshire’s Maritime City’ project will ultimately create a new route through the city to the River Hull (https://maritimehull.co.uk). But as the transformation takes place, set to be fully unveiled in 2023, there are still opportunities to share in its rich maritime history and seafaring links. Take a stroll across the striking new ‘Murdoch’s Connection’ footbridge providing a pedestrian link from the city centre to Hull marina, waterfront and fruit market area, named after the city’s first female GP Dr Mary Murdoch, who died in 1916 (https://bit.ly/2SRzBcY).

Yorkshire’s historic maritime city, Hull is also home to Old Town, cobbled streets surrounded by reminders of Hull’s past; free Museums, where visitors can encounter sea monsters, Romans and a life-sized woolly mammoth; ground-breaking theatre, including pioneering Hull Truck Theatre; the Ferens Art Gallery, with one of the finest regional art collections in the country, and The Bonus Arena, a state-of-the-art, music and events complex. For more details, visit www.visithull.org